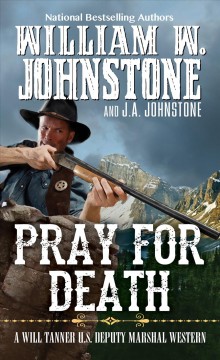 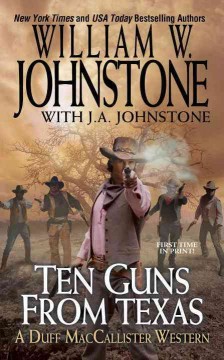 Ten Guns From Texas : v. 6 : Duff MacCallister Western
Johnstone, William W.
When Duff MacCallister and his partner, Elmer, agree to rescue the Texas governor's daughter from a gang of fence cutters called the Blue Devils, they must team up with three outlaws that they don't completely trust. 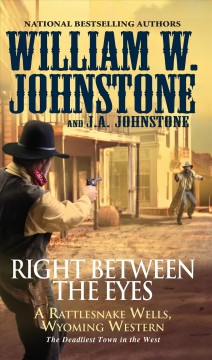 Right Between the Eyes : v. 3 : Rattlesnake Wells, Wyoming
Johnstone, William W.
A lawman with a past. A gunman with a grudge. A blood-soaked massacre just waiting to happen. Welcome back to Rattlesnake Wells, Wyoming... In a wild frontier boomtown like Rattlesnake Wells, it's hard to know who to lock up, who to let out, and who to gun down. But as town marshal, it's Bob Hatfield's job to separate the sinners from the saints - or at least keep them from killing each other. Now there's a new boy in town. He's fresh out of prison. He swears he was wrongfully convicted of embezzling from his boss at the local mine. He wants to clear his name and reclaim the woman he loves. Hatfield wants to give the boy the benefit of the doubt. But when all hell starts to break loose--escalating from vicious saloon fights to violent shootouts - Bob knows there's more to the story than a little bad blood between townsfolk...Someone is gunning for him. Somewhere in Rattlesnake Wells, an enemy from Hatfield's past is waiting to make his move. And sometimes, there's only one way to deliver justice: right between the eyes... 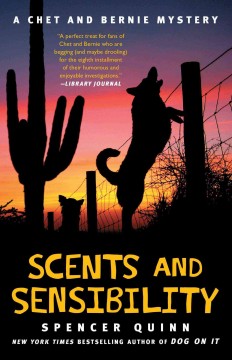 Scents and sensibility
Quinn, Spencer
When his neighbour gets in trouble for cactus smuggling, Bernie Little, along with his dog, investigates and discovers dangerous goings-on in the desert that seem to be linked to a strange festival, a cult, and a long-ago kidnapping. 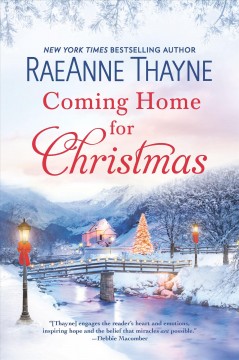 Coming Home for Christmas : v. 10 : Haven Point
Thayne, RaeAnne
"Elizabeth Hamilton has been lost. Trapped in a tangle of postpartum depression and grief after the death of her beloved parents, she couldn't quite see the way back to her husband and their two beautiful kids...until a car accident stole away her memories and changed her life. And when she finally remembered the sound of little Cassie's laugh, the baby powder smell of Bridger and the feel of her husband's hand in hers, Elizabeth worried that they'd moved on without her. That she'd missed too much. That perhaps she wasn't the right mother for her kids or wife for Luke, no matter how much she loved them. But now, seven years later, Luke finds her in a nearby town and brings Elizabeth back home to the family she loves, just in time for Christmas. And being reunited with Luke and her children is better than anything Elizabeth could have imagined. As they all trim the tree and bake cookies, making new holiday memories, Elizabeth and Luke are drawn ever closer. Can the hurt of the past seven years be healed over the course of one Christmas season and bring the Hamiltons the gift of a new beginning?"--Publisher description. 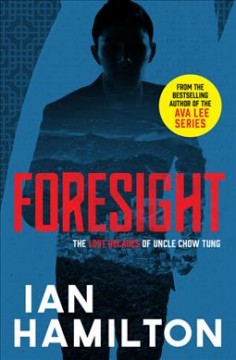 Foresight : v. 2 : Uncle Chow Tung
Hamilton, Ian
"1980, a pivotal year in modern Chinese history as Premier Deng Xiaoping begins what he intends to be the transformation of China into an economic superpower. The most visible evidence of Deng's policy is the creation of Special Economic Zones, and one has been set up in Shenzhen, next door to Hong Kong and on Fanling's doorstep. Among triad leaders, Uncle is the only one who recognizes that Deng's intentions could have profound repercussions on their organizations. To protect his gang and their interests, he acts to not only minimize negative impact, but to turn events to his advantage."-- 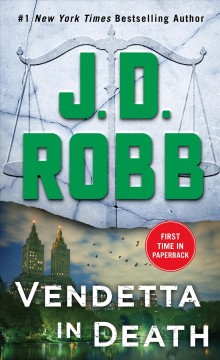 Vendetta In Death : v. 49 : In Death
Robb, J. D.
She calls herself Lady Justice. And once she has chosen a man as her target, she turns herself into a tall blonde or a curvaceous redhead, makes herself as alluring and seductive as possible to them. Once they are in her grasp, they are powerless. The first victim is wealthy businessman Nigel McEnroy. His company's human resources department has already paid out settlements to a couple of his young victims-but they don't know that his crimes go far beyond workplace harassment. Lady Justice knows. And in one shocking night of brutality, she makes him pay a much steeper price. Now Eve Dallas and her husband, Roarke, are combing through the evidence of McEnroy's secret life. His compulsive need to record his misdeeds provides them with a wide range of suspects, but the true identity of Lady Justice remains elusive. It's a challenging case, made even more difficult by McEnroy's widow, who reacts to the investigation with fury, denial, and threats. Meanwhile, Lady Justice's criminal crusade is escalating rapidly, and if Eve can't stop this vigilante, there's no telling how much blood may be spilled. 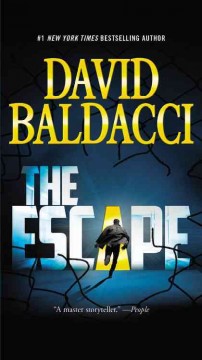 The Escape : v. 3 : John Puller
Baldacci, David
"When John Puller's older brother Robert inexplicably escapes from the military's most secure prison, where he's being held for national security crimes, Puller finds himself part of an investigation to hunt down his own brother. As he digs more deeply into the case, Puller discovers troubling details about his brother's conviction and that someone is out there who doesn't want the truth to ever come out." -- from author's web site.

Connecting in the Library

Download books to your computer, tablet or smart phone! Learn more about the OverDrive service.

Those trying to access eLibraries that have a 4 digit patron barcode need to add “P” in front of your 4 digit number. If you have a 14 digit code continue to enter as you have in the past.

May 29 @ 10:00 am – 12:00 pm Library Allard
Bibliothèque Allard Regional Library and the Victoria Beach Branch host an annual 2.5 & 5 km Walk/Run for  Literacy every spring.  This year, we’re adding a TWIST! This year we are asking families in the…
Read the full article…
Tickets
Kickass Women’s Day 2021 OUTDOOR MARKET

Jun 19 @ 10:00 am – 2:00 pm Village Green
This is the 7th annual Kickass Women’s Day fundraiser for the library and we’re excited to hold it at the Village Green this year! Stop by to check out the awesome vendors, our blowout book…
Read the full article…
March – June 2021 Mar – Jun 2021

Check out our other online resources.

This library is participating! Log in with your library card.

We have them online – you just need your library card to access them.